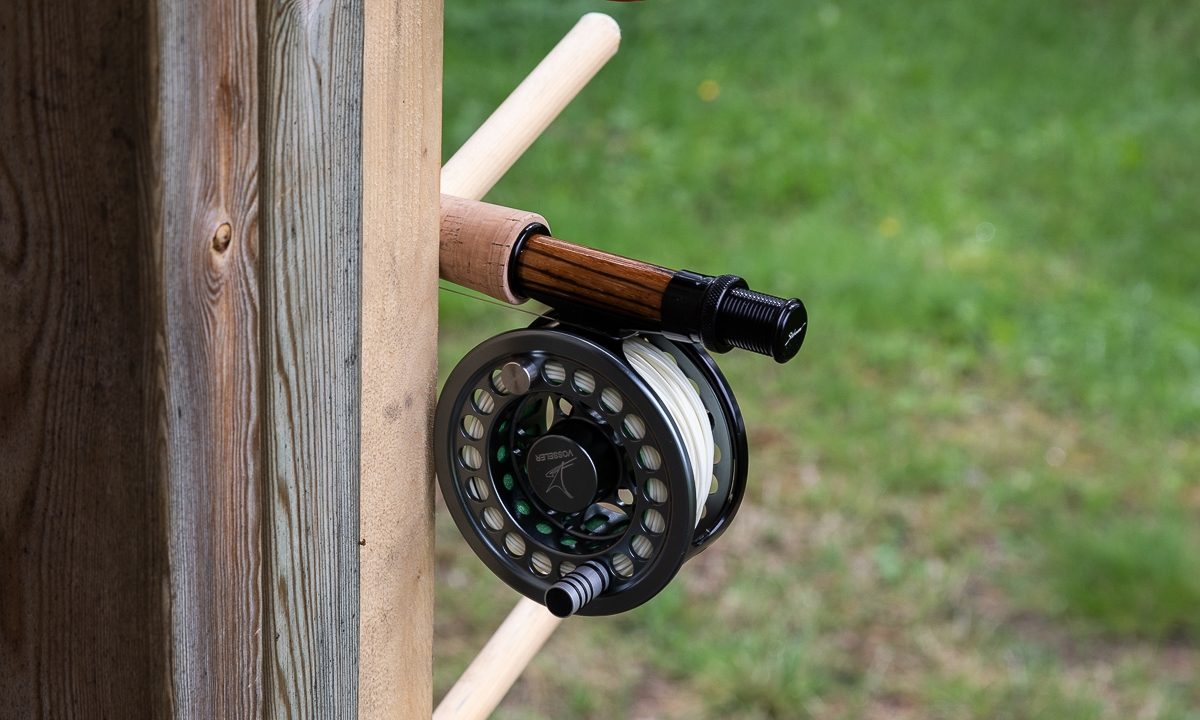 Leaders seems to be on the menu lately — I am a lame bastard, so I just dug out an old article I wrote in 2003 or so. It is, funny enough still true for me … to some extend.

Anyway, what I learned from my old friend Bernie – who sadly passed away a few years ago. That he was pretty old (over 85 or so – nobody knows) does not ease the loss. Anyway – we worked on a leader which allows exact control. The waters (rivers Kyll and Ahr in Germany) we fished together were small, and we did not want the loop to open until the very end of the leader. Otherwise, the fly ended up in the bush above – we are talking tunnel fishing here. I hope you enjoy the old writing and forgive me for being lame 😉

The video is a documentary about Bernie … my first proper flyfishing teacher. There are two characters shown in the video. The older one is Bernie. The other is some clown trying to look professional with a visor and a headset. Rather the opposite of Bernie. Bernie was cool.

Generally speaking (in fishing-lingo, that is), a leader is the piece of line between the hook and the main line. This piece of line is typically somewhat smaller in diameter than the main line. Various sorts come into play, level line monofilament for bait fishing, wire (for pike and the like), a shock leader for fishing in the sea – and the so-called tapered leader for angling with the fly.

That’s it. There’s not much more to say, is there? Well, if it were all so simple, you’d not be on this website, would you?

Presenting the fly to a fish (tossing a hook with fluff around onto or in the water – in more straightforward language) is a rather complex affair, which should not be underestimated. So let’s look at the problem from the start, the feeding fish in a stream, Mr. fish is looking upstream, feeding. He grabs a bite whenever the big conveyer belt-like flow brings food downstream- either on the water surface or in the water body. Therefore the fish is looking upstream virtually all day.

A rather dull life. Well, fish don’t know that, so… However, being in such a position for extended periods of life imprints some very well-defined patterns in that little fish’s brain. For instance, the fish has never seen a mayfly with a v-wave in front of a boat, so you (the clever angler) must avoid this. Sounds simple. Presenting a fly like that is called dead drift. OK, there are other forms, such as the famous running sedge or the little bait fish escaping. Still, in imitating all such behavior, one must have reasonable control over the lure.

I guess you start to get my point. Let’s continue looking at dead drift. A taut line causes drag (that tiny, tiny v-wave). Therefore you need a slack line between you and the fly. The trick is to have enough slack in the line to avoid drift but enough contact to hook up with fish. The flowing current does not make this any easier.

So that’s the problem in a nutshell. The more natural your presentation looks to the fish, the more you’ll catch, particularly the wild ones.

The system consists of fly lines and precisely matched rod tapers to the endpoint. At the end of the line, a leader is attached.

Casting this system is done with subtlety rather than power, as it is manoeuvered to develop a loop. This loop gains great speed, even when tossed with the most minimal power. This power must be spent so the fly lands on the water with natural elegance. The more precisely such behavior is mimicked, the more fish you catch.

Landing a dry fly softly also increases its tendency to float. This allows you to use slimmer and more natural fly designs, likewise for Nymphs, which you can drop into the water precisely where you want them. When you can control the amount of slack in the leader and tippet, a nymph can sink without being hindered by the line. The flies don\’t need much or even any weight added to them.

There are tapered, furled or braided, and knotted leaders. All have pros and cons. In my opinion, the knotted type is preferable for the type of fishing described above. So I looked deeply into this kind of leader. My first book on Fly-fishing was “A fly fisher\’s life” by Charles C. Ritz – ASIN: B0007EI4CU, which had some information about knotted leaders. As this was „an old“ book, I smiled arrogantly and went ahead tossing hard-earned money out of the window by shopping for all these fantastic things one gets offered by the „industry. “ You can guess the outcome. The fishing never really worked. Through contact with some other anglers and reading more in books and the „net, “ I frequently ran into advocates of the hand-tied leader.

So I searched for my first book again to look for detailed recipes for knotted leaders. Charles C. Ritz describes three main parts of a leader.

The total length in Ritz’s book is never really more than 2,9m. I suspect this is because of the shorter and different action of the cane rods of the time.

From other sources, I heard that a leader should be 1.5 times the rod length. I found others advocating a similar ratio, so I applied this to the Ritz 60/20/20 system and experimented. With modern rods and lines, I concluded that a leader of 1.35 times the rod length worked best for me. I also tied a few for some friends, and the reactions were all more than positive. As this system seems to work for my friends from Lapland to Nevada, I am sharing it with you here.

On to the technical bit. The single pieces of monofilament line are tied together with blood knots, named after their inventor Mr. Blood. These knots are ideal as they provide a straight connection without bends and turns. I mostly use Maxima camo for the leader and Stroft GTM for the tippet, but the choice of monofilament is very much up to you. If you believe all the hype, you can even use fluorocarbon.

For the connection of taper and tippet, I insert a little ring known as the leader ring.

The Leader is connected to the fly line with a nail knot or similar. Don’t worry about having to change the whole leader often. You won’t have to.

Have fun tying the leader. It’s a little easier with using a Blood-Knot tool, though.

always at the centre of the best fishing – please call or email. English, German, Norwegian and fishing spoken.

Me and my team guide you to the best spots, fix splendid accommodation and make sure you a have jolly good time. Just call and we find how we can also make your trip an unforgettable experience. Whatever floats your boat – we float it high.